Hanna Trampert (neé Adamik), graphic designer and fine artist, was born on the Baltic coast in Poland and has been living in Germany since 1985, since 1999 in the town of Trier.
From 1983 – 185 she studied Russian Philology and Philosophy at the Universitiy of Lublin. In 1989, Hanna Trampert has started her career as a fine artist, studying graphic design at the University of Darmstadt from 1995 to 1999, webdesigning in Saarbrücken in 2003, taking painting courses with Foster Glyn and Piotr Skroban in Heidelberg from 1994 to 1997, cooperating with the artists “editions trèves” in Trier.

“Hanna Trampert portrays nature by means of extensive areas and gestures, thus making it palpable exclusively through colour associations. Landscape is not made an inventory of. The immanent perception of nature is not linked to specific landscapes. There is in general no comprehensive perception of landscape, but a reduced, very elementary, sensual way forests, meadows, grass, wind and water are experienced…”

“Sometimes at second glance a face becomes visible from the colours that dominate the individual painting, be it the colour of the plants, of water or of the air. Only hinted at in shadows, incomplete, blending with its surroundings. There are no further figurative references. We can just about make out human features in those faces, but often so elementary that the point seems to be the portrayal of the human being itself. Some faces seem to allude to animals even. In human terms, the face reflects feelings and emotions, it allows insight into our inner world, is a mirror of what we call our soul.”

“Does nature, after all, show its human side in Hanna Trampert’s paintings, does nature acquire human features in the artist’s imagination? Are her paintings all about a personification of nature, nature with a soul as it were? Or is the human being perceived as part of nature and merges with it? It is not for us to decide.”

“The two-dimensionality of a painting mounted on a wall is an illusion. A painting is, in actual fact, some sort of multi-dimensional space full of ideas, knowledge and intuition, feelings, memories and guesses.” 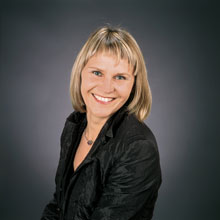